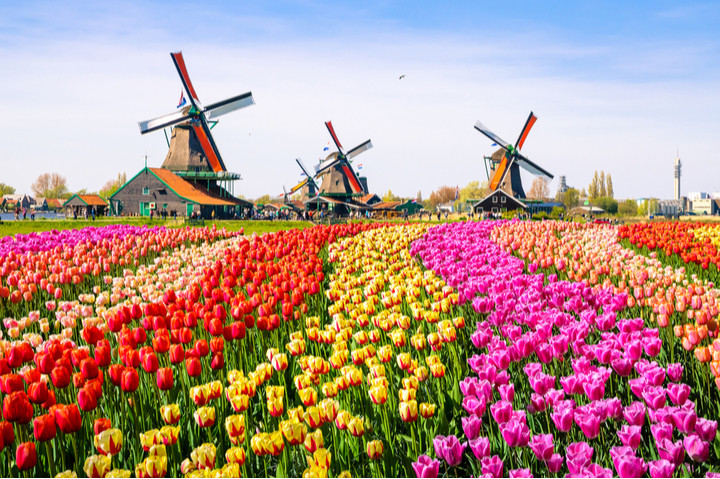 Around 11 million tourists visit the Netherlands each year to admire the wonderful windmills, canals and tulip fields. Most of the tourists visit only the provinces of North and South Holland because it concentrates really what you need to see from the Netherlands. Dutch peoples have a broad knowledge of languages and most of them speak English, most understand German and even sometime are able to help in French. Another interesting fact about the Netherlands is that they have one of the highest rate of museums by square meter in the world. When visiting the Netherlands be sure to try one of their specialties, among them cheese. A last specificity of the Netherlands, the coffee shops that attract a lot of tourists that want to take a look into these shops where drug can be bought (drug are indeed legal in the Netherlands).

Things to do in the Netherlands

The Rijksmuseum is the Dutch national museum of arts and history of Amsterdam. It is on of the most visited museum in the Netherlands with more than 2 million visitors per year. The museum has some masterpieces of Rembrandt, Frans Hals and Johannes Vermeer.

Like its name let it think, this museum is dedicated to Vincent Van Gogh. The museum contains the largest collection of Van Gogh’s paintings and drawings in the world. Like the Rijksmuseum, the Van Gogh museum has about 2 million visitors each year, making it one of the most visited in the Netherlands, but also in the world (23rd in 2017).

The Scheepvaartmuseum is dedicated to the maritime history of the Netherlands. Their collection is one of the biggest maritime collection of the world, with painting, scale models, navigation instruments, weapons and world maps. The visitors can also visit a true replica of the Amsterdam, an 18th century cargo ship of the Dutch East India Company (VOC) which is the most powerful company that have ever existed and that made Amsterdam one of the most richest place of the world in the 17th century. The museum is located in the former naval storehouse.

Amsterdam is also the place where is located the historic brewery of the well known Heineken beer. The brewery was in use until 1988 and it serves now as a visitor center.

The Keukenhof is not less than one of the most beautiful spring parks of the world. It counts 7 million tulips and a total area of 32 ha. Tulips are the symbol of the Netherlands and the Keukenhof is simply the biggest tulip park of the world. Pay attention that the park is only open from end march until end may, which is the season where you can admire the tulips. But if you are in this period in the Netherlands then you shouldn’t miss it, it is certainly the most beautiful place to visit in the Netherlands.

The Kinderdijk is the typical picture people have of the Netherlands with its 19 windmills of the 18th century aligned around a canal. These are classified as World Heritage by Unesco since 1977. The Kinderdijk is the perfect place to spend a couple of hours walking or with the bicycle on the east of Rotterdam.

Even if it is the administrative capital of the Netherlands, The Hague looks like a village and not a town. The city has the surname of the Royal city on the sea. Indeed, the sumptuous city is the political center of the Netherlands since centuries. All the big decisions of the country are taken in the Binnenhof, which is worth to be seen. The working place of the King, the Noordeinde Palace, is located next to it and is also worth to be seen. The Hague is also the place where the King main residence is located.

Gouda is a lovely city that looks in many ways like Amsterdam, but in more little. The market place of the city is the place to start the visit and to admire the town hall from the 15th century. Then don’t miss the Saint-Jean church, but above all the town is known for its cheese: the gouda. You will have the possibility to visit the museum of the cheese or even a production farm.

Marken is an island at only about 20 km North of Amsterdam. It was for long isolated from the continent. Since 1957, it has been linked by a road, but it has held its charm and the traditional houses. You will also be able to visit the clog maker workshop, a tradition in Holland.

The sea of Wadden is located between Holland and Denmark. The Wadden refers to the group of about 50 little islands that form a real ecological treasure. Only 5 are inhabited. Texel is the biggest and the most visited of the Wadden islands. It is also the closest one of the province of North Hollande. The island is 25 km long for 9km wide and its typical flat landscape is the perfect place for bicycle trips.

The city of Delft is known worldwide due to its link with the painter Johannes Vermeer and the beautiful earthenware. The city is a very lively city-museum with churches and mansions.

Maastricht is located in the south of the Netherlands and it is one of the oldest city of the country. When walking around you will discover this medieval city. The city has also roman ruins. Due to its location on the south of the country, the architecture looks totally different than the rest of the Netherlands and it looks more to the Belgian and French architecture.

Rotterdam is the second biggest city of the Netherlands and the biggest port of Europe (and the 10th in the world). Rotterdam is known for its unique architectural design and with its urban design. The Cube Houses are a must see for the lovers of innovative architecture.