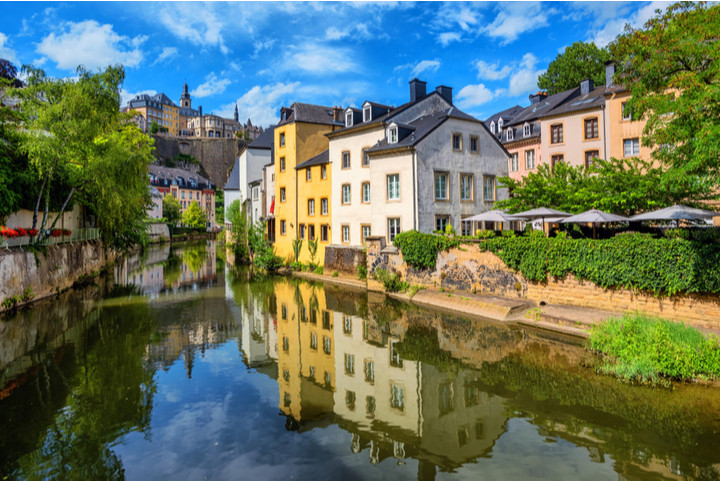 Even with its little size, Luxembourg has its own cultural and natural richness, which explain that this little country have about 1 million yearly visitors. Luxembourg can be divided into 5 regions : the capital city Luxembourg and its surroundings, the Ardennes in the North with its natural parks, the little Switzerland (also called the Müllerthal), the Moselle valley and finally the Red Lands, which is the industrial heartland with its mines and the Luxembourg’s largest towns.

Things to do in Luxembourg

The capital city of Luxembourg is a real mixing of modern and past architecture. The city has a rich history and has some exceptional landmarks like the fortification that are listed on the UNESCO.

The grand-ducal palace is the official residence of the Grand Duke of Luxembourg and it is also where he performs most of his duties as head of state. The building is from the Flemish Renaissance (16th century) and it is one of the most beautiful of the city. The palace can be visited during the summer and begin September. More information about the visit and the dates can be found on the website visitluxembourg.com.

The Bock Casemates are underground fortifications composed of kilometers of galleries and it is one of the most visited sites of Luxembourg. The site is als listed on the UNESCO World Heritage Site and it gives a beautiful view of the neighborhood of the Grund, the Clausen and the Pfaffenthal.

The Old Quarter of Luxembourg***

The Old Quarter of Luxembourg is certainly the best place to start the discovering of the city of Luxembourg. It is listed on the UNESCO world Heritage site since 1994. The Old Quarter is located at the confluence of the Alzette and the Pétrusse rivers. Don’t miss the Grund neighborhood, one of the most touristic of Luxembourg, with is old homes, bridge, the view on the old fortress and the abbey of Neumünster. The neighborhood has also numerous pubs and restaurants.

National Museum of History and Art of Luxembourg**

The National Museum of History and Art (MNHA) shows the archaeological, historical and artistic national collections of Luxembourg. The museum is built to give a journey through the time from the prehistory, the romans (with the famous Victen Roman Muse Mosaic), the middle age, until the most modern and contemporary arts.

The Grand Duke Jean Museum of Modern Art (Mudam) is built on the historic site of the Fort Thüngen by the well known Sino-American architect Leoh Ming Pei, the museum counts more than 200 works by more than 100 artists.

Panoramic Elevator of the Pfaffenthal*

The cathedral Notre-Dame was built in the 17th century and its crypt is the resting place of the deceased members of the Grand Ducal family.

The Adolphe Bridge is one of the landmarks of Luxembourg. It was built between 1900 and 1903, during the reign of Grand Duke Adolphe, from which he took the name. It has a total length of 153 m (502 ft) and a height of 42 meters (138 ft), which give a picturesque view on the valley of the Pétrusse and the city of Luxembourg.

Vianden is a little medieval city along the Our river with a little church, surrounded by a city wall and overhung by the famous castle of Vianden. The city was loved by the famous French writer Victor Hugo. The surrounding regions is also wonderful and totally suitable for long walks along the valley of the Our.

Echternach and the Luxembourg’s Little Switzerland ***

Echternach is a little city on the Sûre river and on the border with Germany. The city is famous for its abbey, but also for the its dancing procession on the Pentecost Monday. This event is listed on the Intangible Cultural Heritage of Humanity. Echternach is also located in the region of the Mullerthal, also called the little Switzerland because of its similarity of landscape, but with lower altitude (from where the name little). The region is the favorite place in Luxembourg to go for a trail. The best way to discover the Little Switzerland is to make the Mullterthal trail that stretches over 112 km (70 mi) and consists of three big loops (Routes 1,2 and 3). The region is well deserved by public transport, which makes it easy to return to the start point after the trail.

The Moselle is one of the major rivers of Luxembourg and flows along the border with Germany. The valley is famous for its wine and the medieval towns.

Esch-sur-Sûre is a little city perched on a steep hill and overlooking the Sûre river. The city has a 15th century tower and the ruin of an old castle. The surrounding region is a succession of pasturage, farms and dense forest with little rivers and will be a perfect place for a hike.

The Bourscheid castle is a triangular fortified castle perched on its spur and overlooking the Sûre river. The castle stands at around 150 m above the river and gives an outstanding view.

The city of Clervaux is located in the Ardennes in the deep and narrow valley of the Clerve river. A beautiful Feudal castle of the 12th century is perched above the city. The Benedictine Abbey of St. Maurice and St. Maur is also dominating the city. The abbey was built in 1910 in a Romanesque-Burgundian style.

The Beaufort castle is the ruin of an 11th century fortress protected by moats and an adjacent Renaissance castle.

The Larochette castle is one of the numerous castles of Luxembourg. The ruins are perched above the town of Larochette and date from the 11th century.