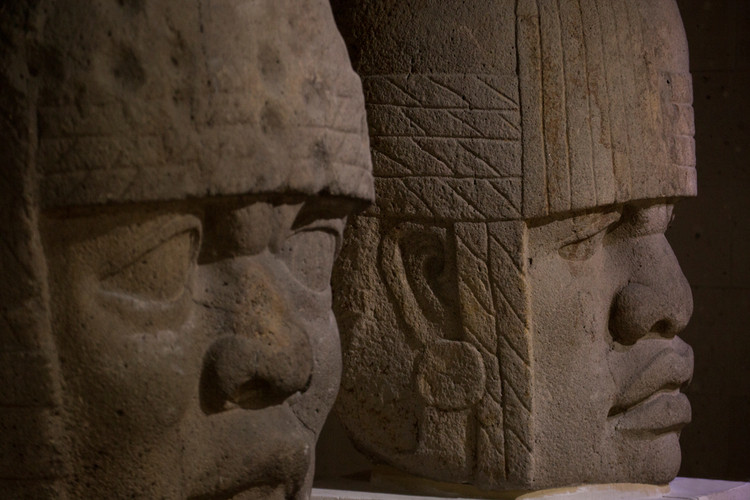 The Olmecs are a pre-Columbian Mesoamerican civilization that was located along the Gulf of Mexico in the coastal plain of the actual states of Veracruz and Tabasco in Mexico. Indeed, this wet and marshy plain is traversed by many rivers and is subject to heavy rain for 6 months (from May to October). These conditions are favorable for the agriculture. Indeed, Corn cultivation in floodplains allows 2 harvests per year. This partially explains the early and high density of population in this region.

Numerous Olmecs cities were exhumed between the Papaloapan River and the Tonala River. It is between these two rivers that this empire was located. But their zone of influence was much bigger. Indeed, numerous archaeological sites has been discovered outside this region with artistic and architectural expression of Toltec influence. These sites are located in the central plateau and the pacific coast of Mexico (in the current states of Guerrero, Morelo, Oaxacas and Chiapas), but also in Guatemala and El Salvador.

These sites outside the coastal plain of the Gulf of Mexico are not Olmecs settlements, but settlements influenced by the Olmec civilization.

The name Olmec comes from the Nahuatl language and it means “people of the rubber country”.

History of the Olmec civilization

Because they appeared before the other big Mesoamerican civilizations and their influence on the next civilizations, they are often considered as the “Mother Culture”.

Although they disappeared around 400 BC, their decline had started around 500 BC. The exact reason is unknown, but their influence has continued beyond. It has irrigated all the Mesoamerican culture on the point of view of writing, calendar, religious rituals, monumental cities, …

Numerous pre-Columbian Mesoamerican civilization found their source in this situation. But, because of ancient pplunder and the difficulties to read their writing let still a lot of unknown area are remaining about this civilization.

Religion of the Olmecs

The jade stone was very common in different cultures and so it had also a special symbol for the Olmecs. This stone symbolize water, but also the blood. The jade was associated with human sacrifice in their rituals.

This civilization was only recently discovered and it is still relatively unknown, but numerous Olmecs archaeological sites were found. The most important are:

Other archaeological sites with the influence of Olmec styles are:

The Olmecs are known for the basalt stone heads, but they are also the first civilization of Mesoamerican to build cities. Their first city was San Lorenzo, in the current state of Veracruz, and it is also the most ancient city of Mesoamerica. It was built in around 1500 BC, which mean 1000 years before the first Mayan cities.

This civilization has also built the first pyramid of Mesoamerica in 1000 BC. They also knew the ball game that was known in the more recent Mesoamerican civilization.

They have also mastered writing and they had even a calendar. Numerous glyphs were found, but they are still not totally understood. Archaeologists discovered that the Mayans had adopted the same spelling for their numbers because of the analog spelling between this 2 civilizations.

The Olmecs had advanced knowledge of agriculture. They had irrigation systems and water reservoirs. Their agriculture was mainly based on the cultivation of corn, cotton and cocoa.

The Olmecs have also developed a network of merchants that was allowing them to exchange cocoa, animal skin (under which jaguar) for precious stones like jade and obsidian.

The Olmecs are known for their colossal stone heads. These are the symbol of the Olmec civilization. They also are evidence of the degree of advancement of this early civilization. Nowadays, 17 Olmec basalt heads have been found. All of them were found in the 3 main Olmec cities, in the current states of Veracruz and Tabasco, and their distribution on the different archaeological site is the following:

These colossal stone heads are made of basalt rocks and were sculpted between 1000 BC and 800 BC. All of them were sculpted based on the same model, but with some variation in the expression of the face and the headdress. The heads were probably representing kings, athletes, …

It is worth to notice, that surprisingly there is no basalt in the region where these Toltec stone heads were found. These blocks of basalt came from the volcanic area of Tuxtlas, located at more than 80 km (50 mi) from where they were discovered.

These colossal stone heads measure between 1.60 m (5.25 ft) and 3 m (10 ft) height and weight up to 25 tonnes. To bring them into their cities, the Olmecs had broad knowledge. The blocks were first transported with the help of wooden logs for several kilometers, until the Papaloapan River. There, they were loaded on rafts strong enough to carry the huge weight of these blocks of basalt and they descended the Papaloapan River to reach the sea. Then, they skirted the coast to go up the Coatzacoalcos River or the Tonala River. Once arrived in the cities, they were sculpted.

Visit the portal of mexico