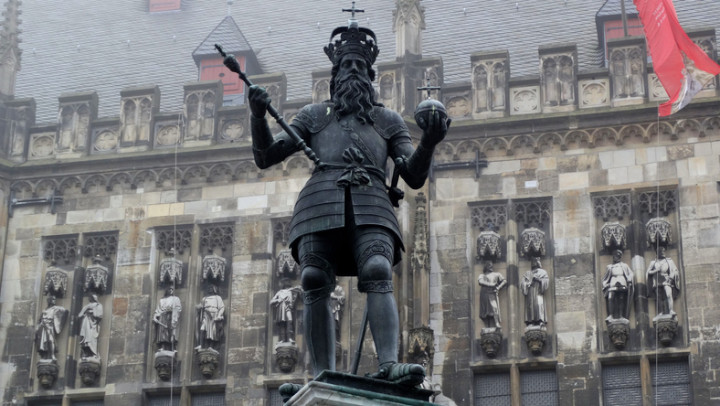 The Carolingian Empire is a Frankish kingdom from the early Middle Ages and located in western and central Europe. It was ruled by the Carolingian dynasty (which is considered to be the second dynasty of France).

Location of the Carolingian Empire on the world map

The Carolingian Empire was located in the following present-day countries:

Charles Martel (the grandfather of Charlemagne) entered the history by stopping the Muslim army at the Battle of Tours in 732. He was the Mayor of the Palace of the Merovingian and so he was the de facto ruler of Francia from 718 until his death in 748, but not the king.

As a result of its victory against the Muslim, the Pope designed him as a defender in the West of the faith and the Church and ask to be under the Frankish protection.

Charles Martel died in 748 and his son Pepin III (Pepin the short) become also Mayor of the Palace of the Merovingian. In 750, he asked the Pope Zachary the authorization to end the reign of the Merovingians by taking the crown in place of Childeric III. Which the Pope accepted by declaring that “it is better to call the one who possesses the power King than the one who does not”.

So in 751 Pepin became King of the Francs. Pepin the short died in 768 and, as a result, his two sons (Charlemagne and Carloman) inherited the kingdom. Both were kings until the dead of Carloman in 771.

Charlemagne’s reign was one of near-constant warfare, with annual campaigns. It started in 774 with the Lombard Kingdom after that they threatened the new pope. So he annexed their territories and declared himself King of the Lombards.

Secondly, he started to conquered Saxon territories in 772. However the conquest of Saxony will last until 804, with wars and revolts

Then in 778, he extended is kingdom to the south in the Iberian Peninsula with the annexation of the territories located at the north of the Ebro in Spain.

After that, he extended his Kingdom into Bavaria in 788.

In 800, Charlemagne was crowned Emperor of the West by the Pope, after having rescued him against a conspiracy. So thanks to the alliance between the Papacy and his family, he re-established the Western Roman Empire which was also called the Frankish Empire. Charlemagne continued to call himself King of the Franks and Lombards, in addition to Roman Emperor.

Under the reign of Charlemagne, we assisted to a Renaissance, called the Carolingian Renaissance.

The Carolingian Empire at the death of Charlemagne (814)

But Charles and Pepin died before Charlemagne in respectively 811 and 810.

As a result, Louis was made co-Emperor in 813, and the entire Empire passed to him when Charlemagne died in 814.

In 817, Louis the Pious also solves the problem of his inheritance by dividing the empire between his 3 sons:

This subdivision was similar to the one of his father Charlemagne had planned in 806.

But the first political troubles start in 817 with the rebellion of his nephew, the King Bernard of Italy because of being removed from the power by the new division. He was captured and punished to death, but it was commuted to blinding. However, he died from it 2 days later. As a result Italy was brought back into imperial control.

In 829, Louis the Pious tried to change the subdivision of the Empire to give to his fourth son (Charles the Bald – from his second marriage) a kingdom in the east of the empire, but he got resistance of his eldest sons.

The last years of its reign are years of troubles between his sons. In 838, his second son, Pepin, King of Aquitaine, died and so his inheritance opened a new conflict.

Finally a new treaty is made in 843, the Treaty of Verdun, which settled the partition of the Carolingian Empire.

This treaty divided, from west to east, the empire in 3 kingdoms:

Lothair I received the imperial title, but after the treaty, it loosed its importance and give no power against the other kingdoms.

Lothair I made his son Louis II co-Emperor in 850 and died in 855. At his dead, the kingdom was divided into three parts like it was defined in the treaty of Prüm in 855:

At the dead of Charles of Burgundy in 863, Louis II inherited the Kingdom of Burgundy.

Lothair II died in 869 with no legitimate heirs and as a result his Kingdom was divided between Charles the Bald and Louis the German in 870 by the Treaty of Mersen (or Meerssen).

Louis II died in 875 and therefore named Carloman (the eldest son of Louis the German) his heir.

Charles the Bald was crowned King of Italy and, as a result, Holy Roman Emperor by the Pope.

In 876, Louis the German died and Charles tries to annex his realm, but he was defeated and the Kingdom of eastern Franks was divided between Louis the Younger, Carloman of Bavaria and Charles the Fat.

Charles the Bald died in 877 and he was succeeded by his son Louis the Stammerer as King of the Western Franks, but the title of Holy Roman Emperor lapsed.

Louis the Stammerer died two years later and so his realm was divided between his eldest two sons:

The Kingdom of Italy was granted to King Carloman of Bavaria, but in 879, he was incapacitated by a stroke and so he divided his domains between his brothers. Bavaria went to Louis of Saxony and Italy to Charles the Fat.

In 881, Charles the Fat was crowned the Holy Roman Emperor.

In 882, Louis III of Saxony and Louis III of Francia died. As a result Saxony and Bavaria were annexed to Charles the Fat’s Kingdom. Francia and Neustria were granted to Carloman II of Aquitaine who also conquered lower Burgundy.

Carloman II died in 884 and so his lands were inherited by Charles the Fat, which effectively recreated the Empire of Charlemagne.

But Charles the Fat could not secure the Empire against the Vikings and after buying their withdrawal from Paris in 886, he was perceived by the court as being cowardly and incompetent.

In 887, his nephew Arnulf of Carinthia raised a rebellion. But Charles the Fat fled instead of fighting the insurrection. He died in 888 leaving the empire divided and without clear succession.

The end of the Carolingian Empire

Finally, the dead of Charles the Fat marked the end of the Empire of the Carolingian, which was divided as follows: