A francophone country is a country where French is the main or official language.

French became an international language in the Middle Ages with the influence of the Kingdom of France. And in the 18th century, it became the languages of European courts and diplomacy. It was only in the 20th century that it loses its place as the language of the diplomacy to the detriment of English as a result of the extend of the British Empire and the rise of the English-speaking United States.

In addition to France and its DOM and TOM, French is the Official language of 28 countries:

Other French speaking countries (common but not official language)

Further, there are some countries where French is commonly used, but it is not an official language:

French speakers in the world

The Organisation Internationale de la Francophonie (OIF) estimate in 2014 that worldwide 212 million peoples use French daily and 62 million have learnt it as foreign language. The overall number of speakers is rising, despite a decline in the number of learners in Europe. This is due to the use of French in high-fertility African countries (54.7% of the French speakers are living in Africa). 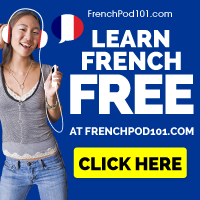 To learn french, we recommend frenchpod101 from Innovative Language. They cover 31 languages and manage to learn real practical conversation with different level from absolute beginner to advanced level.